From picturesque Beaconsfield to historically-rich Canterbury, we round up the best commuter towns around London. 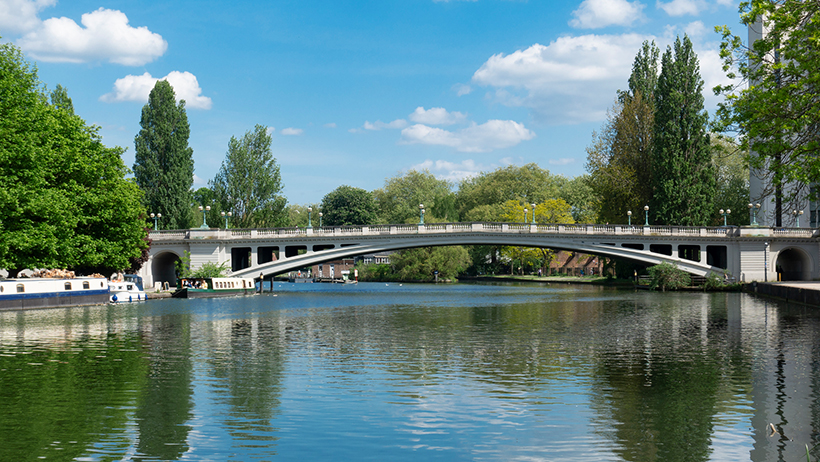 Samuel Johnson sagely observed, 'When a man is tired of London, he is tired of life,’ but that was before the capital’s commuter belt established itself as one of the most attractive and versatile areas to live in the UK. If the countryside has ever appealed, why stay in the capital when the towns dotted along its periphery offer the best of both city and country living? Some even offer a taste of the coast too. From picturesque Beaconsfield to historically-rich Canterbury, we round up the best commuter towns around London.

Only 30 minutes from London by train and with excellent transport links, Reading is undoubtedly one of the more popular spots on the capital’s commuter belt. The town centre is dominated by thriving shops and a £900 million railway station, soon to be the western terminal for London’s Elizabeth Line, making the town even more convenient for commuters.
With major international companies headquartered in Reading, plus a large shopping and leisure centre, the town has a sturdy local economy. It also straddles two rivers and offers a number of green spaces and quiet pubs dotted along the waterfront. With the countryside on its doorstep and its enviably close proximity to the capital, Reading is an increasingly popular choice and as such, offers a diverse range of homes including brilliant new-build and riverside properties. In the last year, terraces properties were shown to be the most popular in the area, selling on average for £323,970. The selling price for semi-detached properties averaged at £398,584 while flats sold for £238,681 on average. 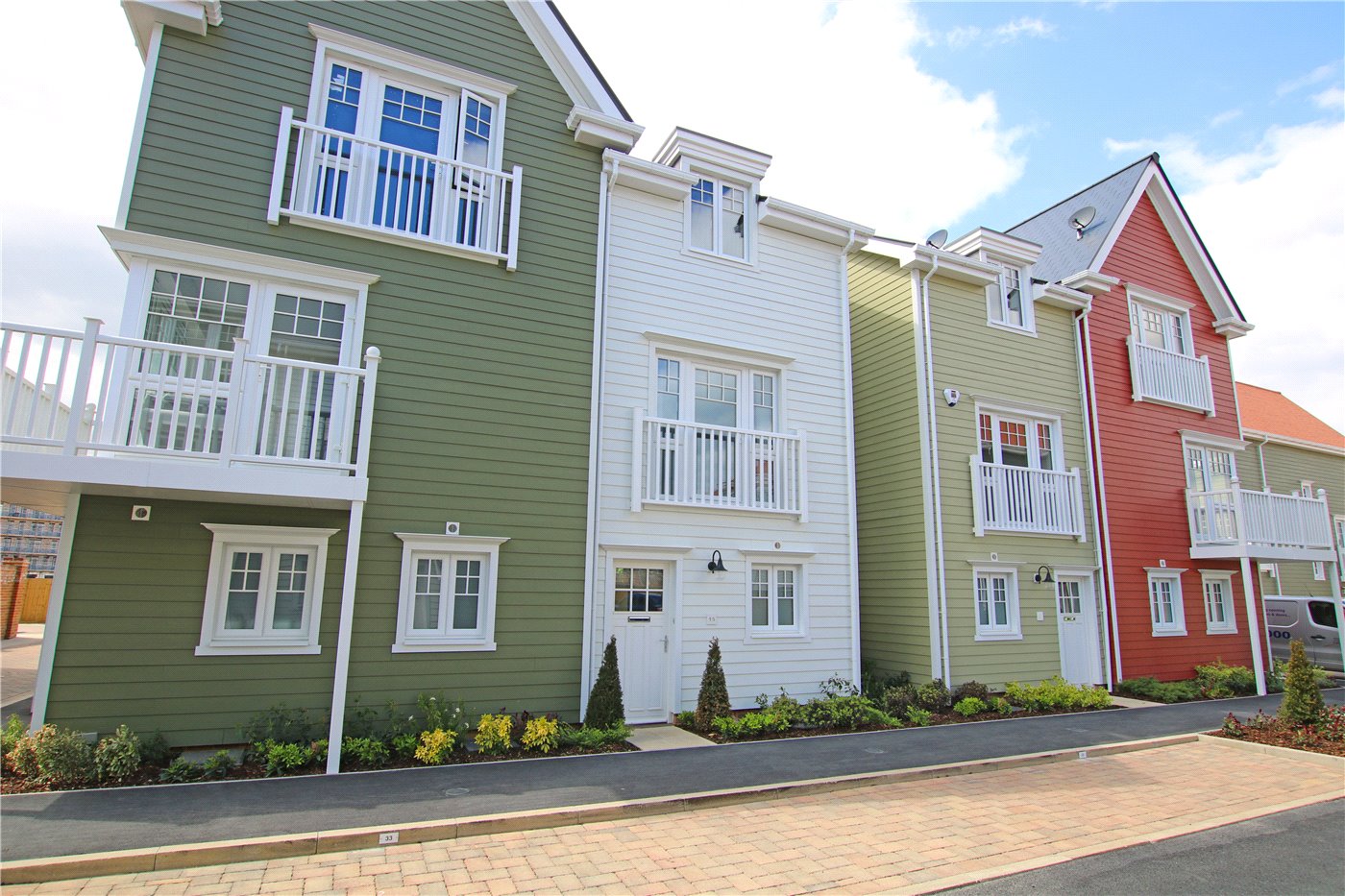 This stunning three-bedroom, semi-detached townhouse is perfectly placed minutes from central Reading in the new, lakeside Green Park Village. The highlight feature is undoubtedly the Shaker style kitchen with Bosch integrated appliances and open-plan dining area with patio doors leading out to a rear garden. The top floor master bedroom is finished with fitted with built-in wardrobes and an en suite shower room. Other prominent features include underfloor heating and two off road parking spaces.

Like Reading, Slough too is nestled in the county of Berkshire and offers excellent transport links into central London. The station itself is a wondrous thing, designed in the French Renaissance style and brimming with quirky history. It’s actually the fifth station on the site; the original one opened in 1840 and was used by Queen Victoria when she travelled by rail for the first time. Currently the journey into Paddington takes just 20 minutes, but Slough is soon to benefit from the establishment of Crossrail in late 2019.

Black Park is a popular dog walking spot on the western edge of Slough. Its sits adjacent to Pinewood Studios where hundreds of major movies have been filmed since the 1930s, and as such, Black Park has been the setting for countless films including Casino Royale and Batman. Slough is also home to Herschel Park, named after the  astronomer and former Slough resident William Herschel and lined with Victorian villas, once filled with members of Queen Victoria's court. Last year most property sales in Slough involved flats which sold for on average £240,082. Terraced properties sold for an average price of £349,147, while semi-detached properties fetched £420,880. 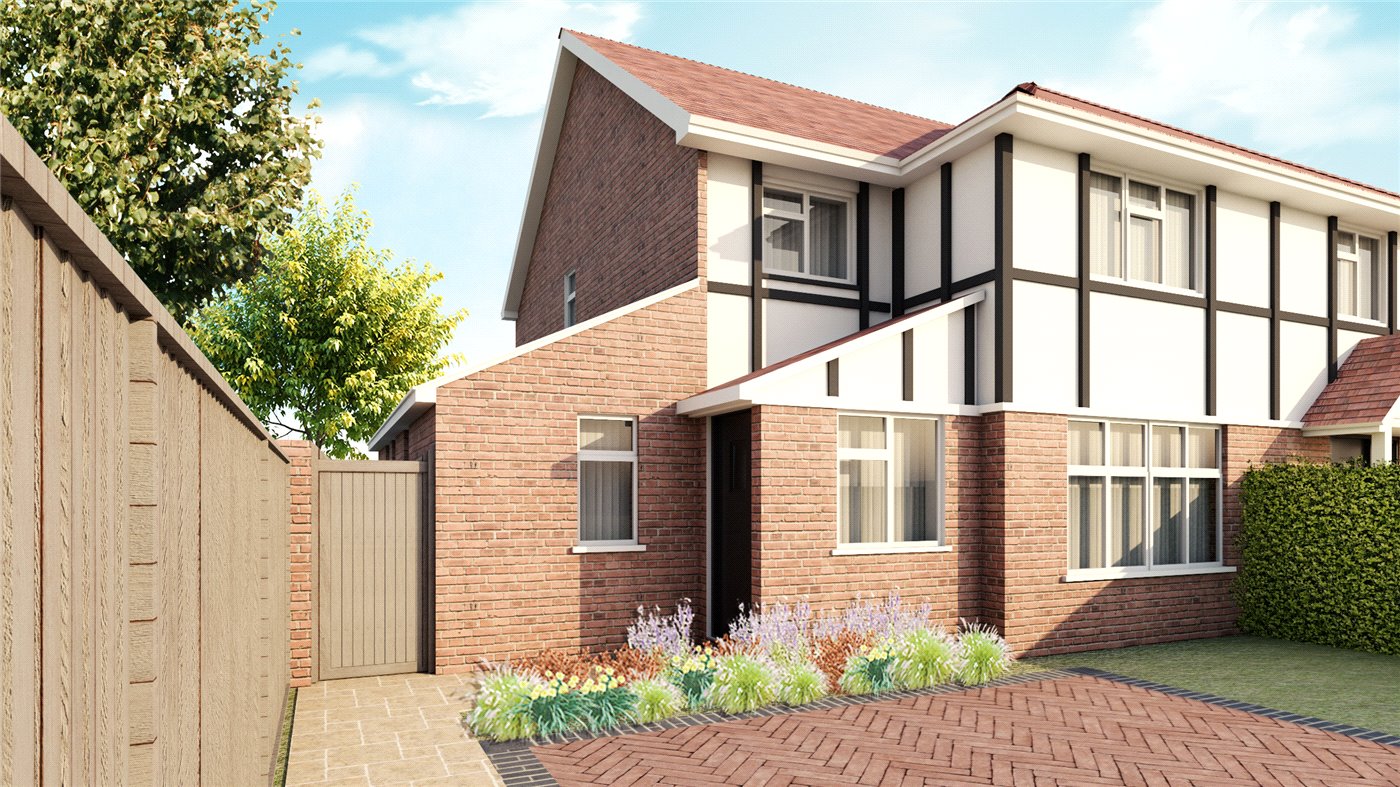 Ideally located off a quiet lane in the leafy parish of Farnham Royal, this contemporary freehold house is one of two homes being sold off plan and will combine the very best in high specification with an elegant layout designed for modern living. With three bedrooms and a beautifully designed kitchen, as well as stylish bathroom and en suites, the property will make for the perfect family home. The area is well served by road and rail links with the larger neighbouring towns of both Gerrards Cross and Beaconsfield providing direct rail access into London’s Marylebone in around 20 minutes.

This gorgeous county town in the heart of Surrey is home to a striking cathedral and an iconic cobbled high street. Guildford has a reputation as a quality shopping destination and in 2014 Experian voted it the best luxury shopping destination outside of London. Delving into Guildford’s past is a fascinating way to get to know the area. Saxon, Medieval, Tudor, Georgian and Victorian heritage can all be discovered in Guildford Town Centre, from the 12th Century Castle Keep and its stunning grounds to the Guildford Museum, Hatchlands Park and Chilworth Mills. Guildford is a hub for education, science and sport, with the Surrey Research Park, Surrey Sports Park and University of Surrey positioned alongside the Royal Surrey County Hospital. Guildford is just 40 minutes from central London and very easy to reach whether you are travelling by car or train. It also benefits from its close proximity to Heathrow and Gatwick airports. With an overall average price of £539,024 in the last year, Guildford was more expensive than nearby Burpham, but cheaper than Shalford and Merrow. 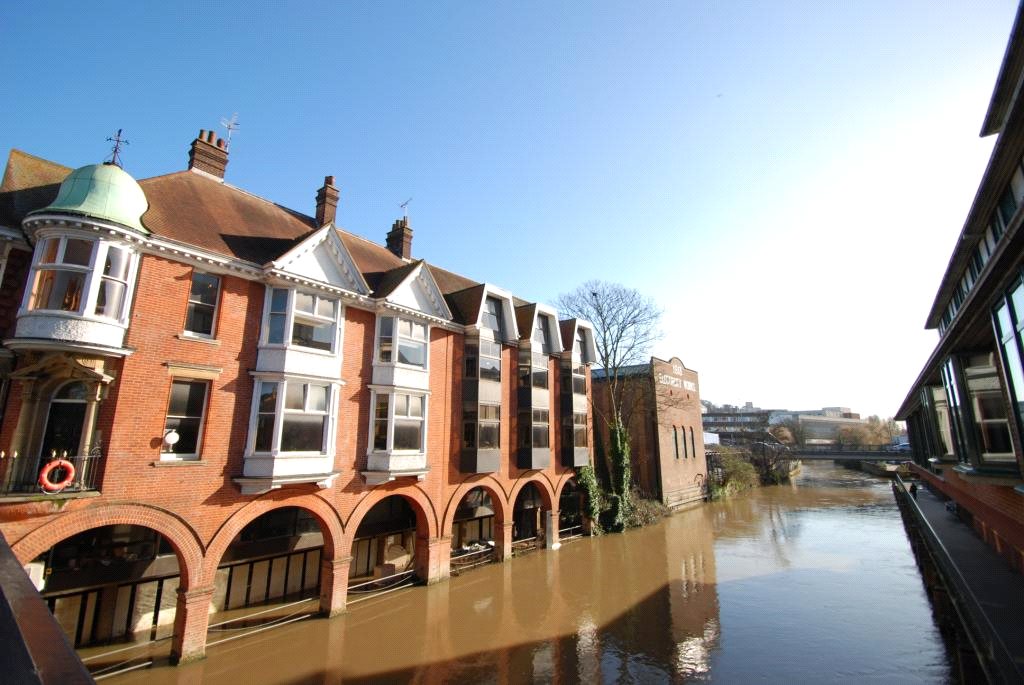 Within easy walking distance from Guildford station and the high street, this impressive apartment boasts a spacious double bedroom with built-in wardrobe, a modern bathroom and a large open plan kitchen and living area. The property has been beautifully finished in neutral tones, wooden floor boards with a contemporary feel throughout.

Thirty five minutes from central London and with a sizable selection of top quality schools, Barnet is a popular spot on London’s commuter belt. Steeped in history and home to a bustling high street and expensive housing, this affluent borough ticks all the boxes. Barnet’s literary history stretches back to the early 19th century when writer Fanny Trollope, mother of the novelist Anthony Trollope, rented Grandon, a fine Georgian house facing the common in Hadley Green Road. The Barnet of today has strong appeal for nature-lovers and families with around 200 family-friendly parks, nature reserves and open spaces. With an overall average price of £612,493, Barnet is one of the most expensive of London boroughs. The majority of sales in Barnet during the last year were flats, selling for an average price of £363,633. Semi-detached properties sold for an average of £685,153, with terraced properties fetching £553,438. 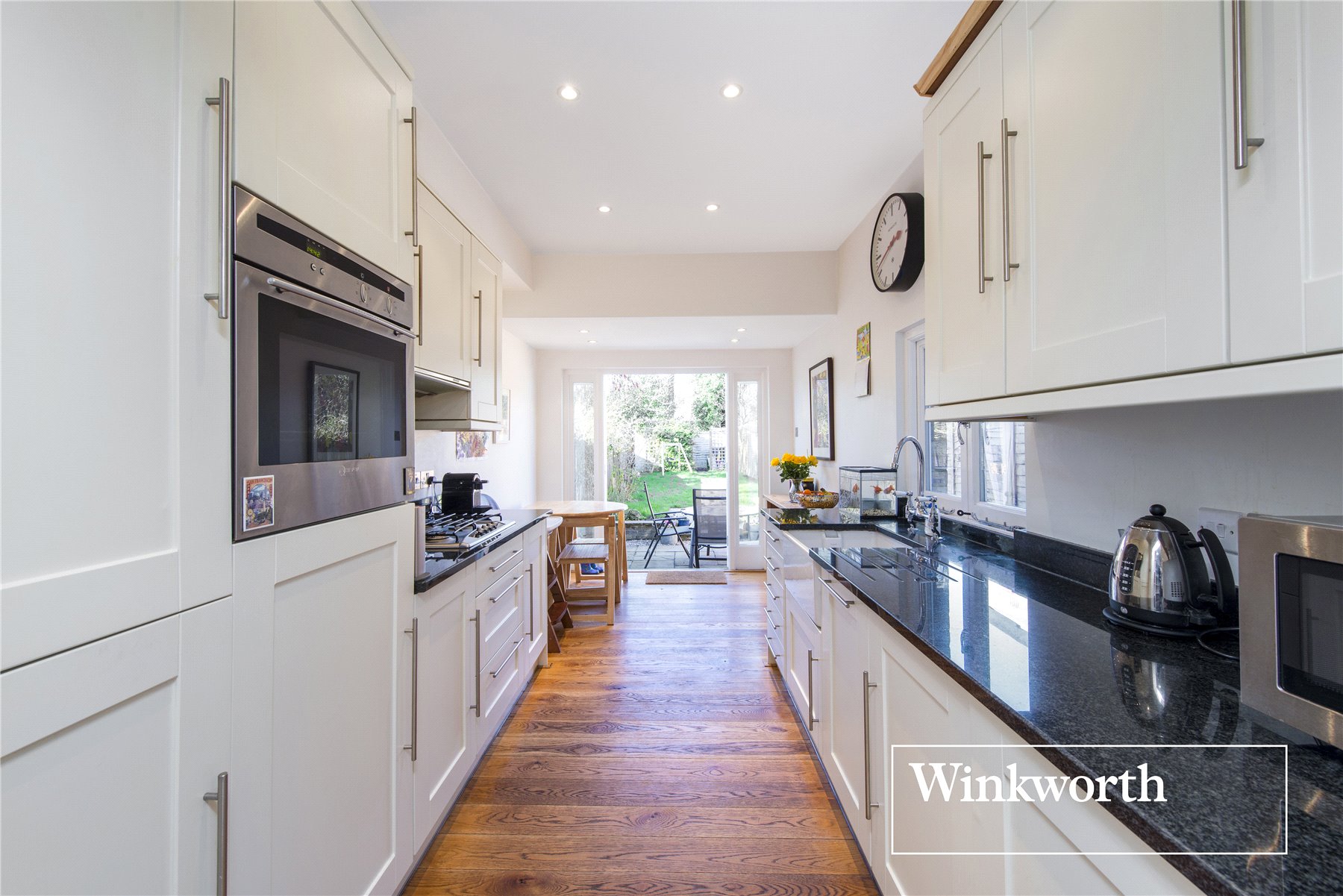 A lot of care has been put into this late Victorian property to create a modern and bright home that combines a contemporary look with original period-style features such as sash bay windows and a gorgeous fireplace. The kitchen has been cleverly designed to make the most of the space, with room for a large table and an almost full wall of windows to views of the garden. The top floor has been converted into a real gem of a master bedroom suite, complete with a Juliette balcony, en-suite shower room and a separate space that can be used for a desk or a small dressing area. Two further beautifully decorated bedrooms sit on the first floor, along with the spa-like family bathroom.

Famous as the setting for Chaucer’s Canterbury Tales, this university city is home to some of England’s finest medieval architecture. St Augustine’s Abbey and St Martin’s Church are spectacular historical sites, and together with the world-famous Canterbury Cathedral, form a UNESCO heritage site. Nearby Herne Bay and the surrounding countryside offer plenty of opportunities to explore Britain’s natural beauty. In Chaucer’s time, there was nothing quick about getting to Canterbury. Today the town is accessible in just under an hour on the Javelin, Britain’s fastest domestic train, making Canterbury an affordable commuter choice for Londoners looking to live away from the bright lights of the city. With a selection of high performing schools, reasonably priced housing and the perfect blend of city, countryside and coast, the price of an annual commuter train fare becomes well worth it. In the last year, overall sold prices in Canterbury were similar to the previous year and 7% up on the 2016 level of £293,601. 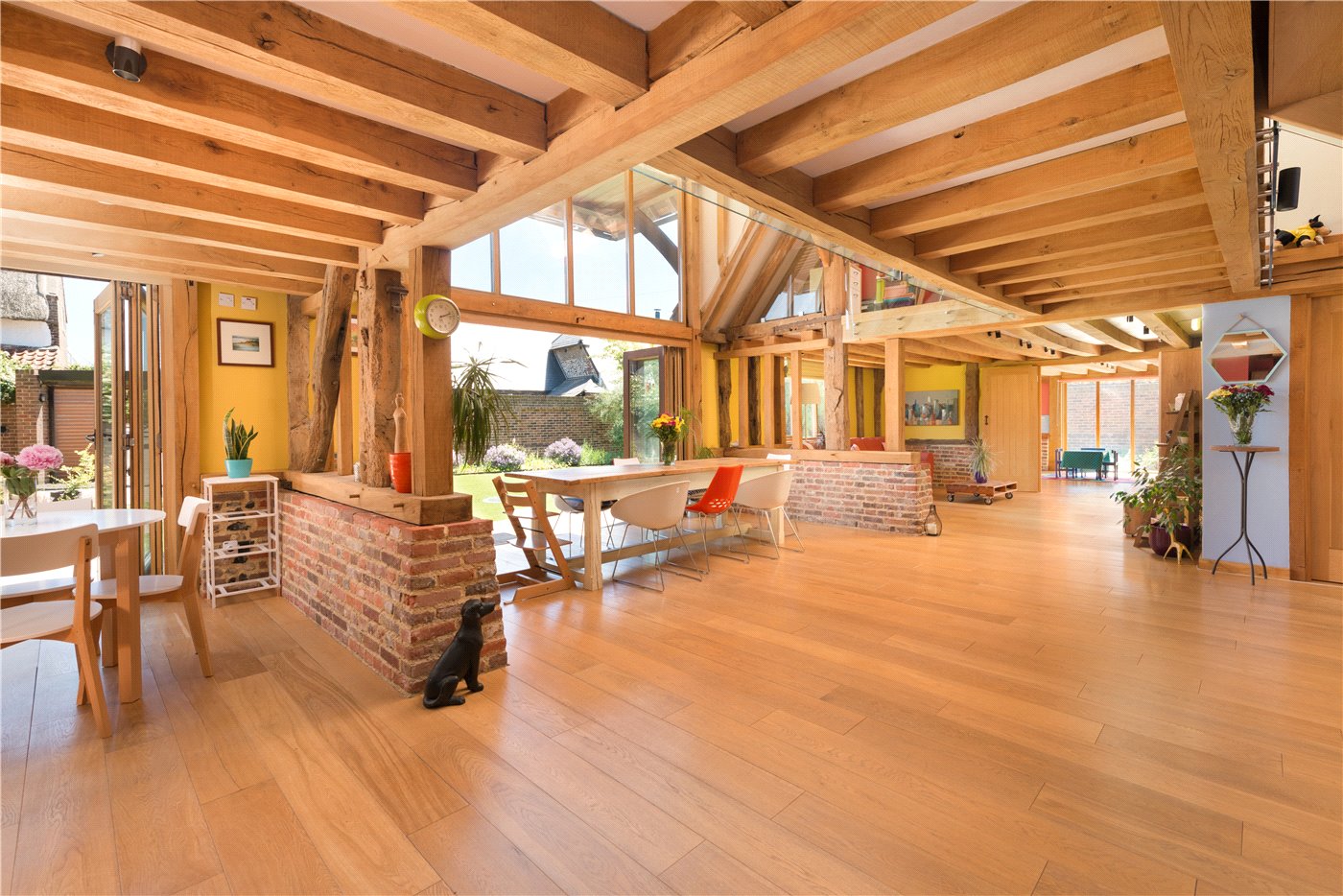 This beautifully presented barn, situated in the popular village of St Nicholas at Wade has been refurbished to an impressive standard throughout. The property has a abundance of height, space and light, with a number of different rooms offering flexibility to suit any lifestyle. On entering, a raised entrance hall leads through to the kitchen, living and dining areas with bi-fold doors opening up to the garden. Upstairs there is a stylish master bedroom with a vaulted ceiling, and a contemporary en-suite bathroom. The family bathroom and a further three bedrooms are on this level, one with an en-suite shower.

This picturesque little town in Buckinghamshire sits less than 25 miles northwest of central London and makes for easy commuting into the capital by way of Chiltern Railways from its own mainline station (you can travel direct from Beaconsfield to London’s Marylebone in around 20 minutes) or the Metropolitan Line from nearby Amersham and Chesham.
Buckinghamshire has had many famous inhabitants, perhaps most notably Oliver Cromwell and Florence Nightingale, but Beaconsfield itself holds a rich history. The town is home to Bekonscot Model Village, the oldest model village in the world and the Royal Standard Pub, located a mile away from the centre of the town, is reported to be the oldest pub in England, once playing host to King Charles I during the civil war. The area has a wide selection of high standard schools, along with a number of reputable restaurants, bars and hotels. Properties range from large town houses to country cottages and manor houses and have an overall average price of £998,362. 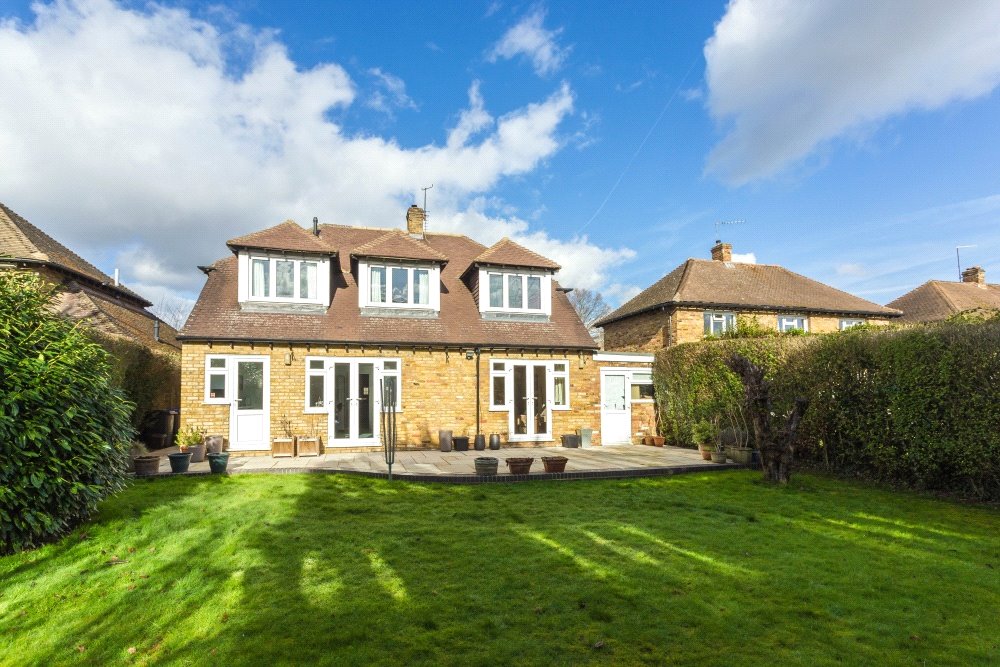 This well-presented detached four-bedroom home in central Farnham Common offers bright and spacious living, just a few minutes walk to shops, pubs, restaurants and other local amenities. Comprised of three reception rooms, four good sized bedrooms, three bathrooms and a stylish, fitted kitchen with breakfast and utility rooms, the property is an ideal family home in a great location for commuting. The ancient woodland of Burnham Beeches is close by and is ideal for countryside walks.

Looking for a taste of both country and city living with a home on the periphery of London? Contact your local Winkworth office or view our wide range of properties for sale across the network within easy reach of the capital.