Britain is blessed with green open spaces where people might play football, walk the dog or sharpen their tennis skills. In many of our towns and cities, we’re never far away from a public park. Here are 20 of the best (parks, public gardens, heaths, greens, arboretums, a model village and two finalists in the RHS Britain in Bloom competition) across the country, with properties for sale nearby

Britain is blessed with green open spaces where people might play football, walk the dog or sharpen their tennis skills. In many of our towns and cities, we’re never far away from a public park. Here are 20 of the best (parks, public gardens, heaths, greens, arboretums, a model village and two finalists in the RHS Britain in Bloom competition) across the country, with properties for sale nearby. 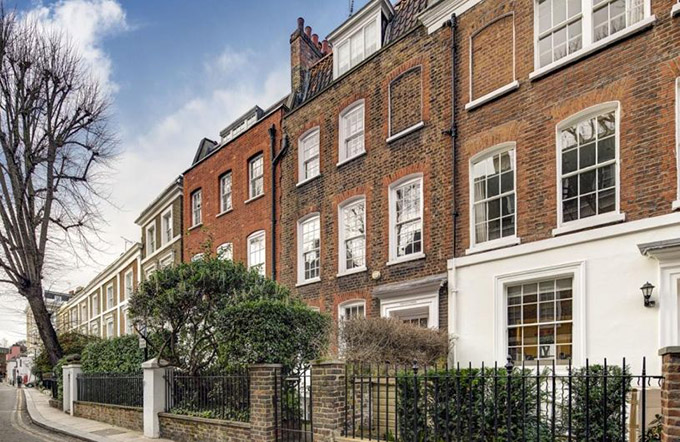 Kensington Gardens is one of the capital’s Royal Parks. Here you can find the Albert Memorial and the Peter Pan statue. This terraced town house in Holland Street has a first-floor drawing room and a lovely roof terrace for a Peter Pan view. 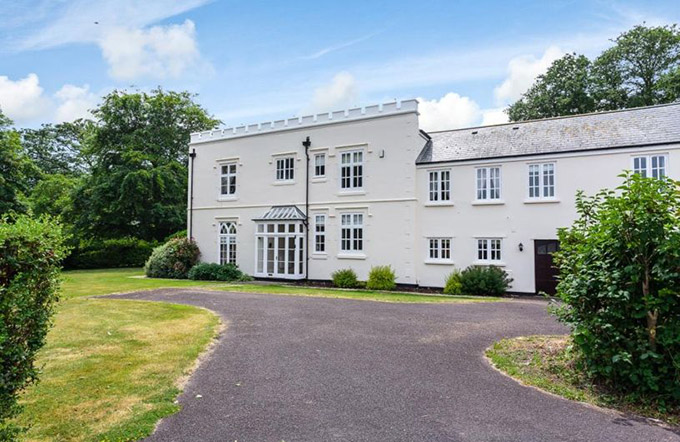 Seaton is a popular holiday resort in east Devon among cliffs, overlooking Lyme Bay and the Jurassic Coast. Windsor Gardens have colourful open spaces in the summer and there are plans afoot to redevelop the seafront. This grand Georgian gem offers four-bedrooms with period detailing and views to the estuary beyond the garden. 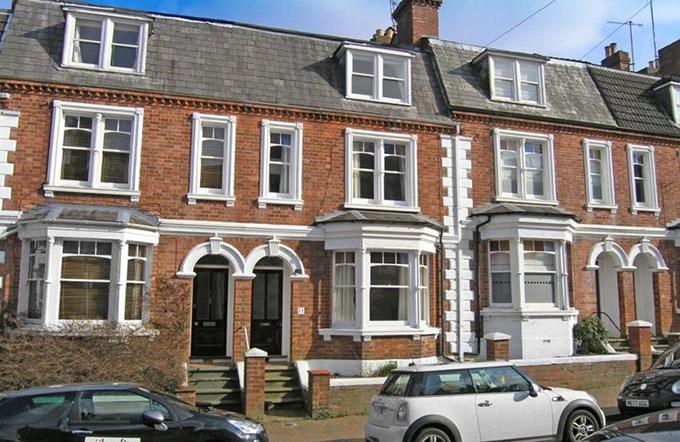 Calverley Grounds was acquired by the council as a public park in 1920. The terraced formal gardens include an Italianate “room” and a stream-fed lake. A short stroll to the south is The Grove. It’s a popular space with locals, but you can’t get much more local than this four-bedroom property. The street ends at the park entrance. This Victorian terrace property has a pretty courtyard garden. It’s convenient for shops and the station, too. 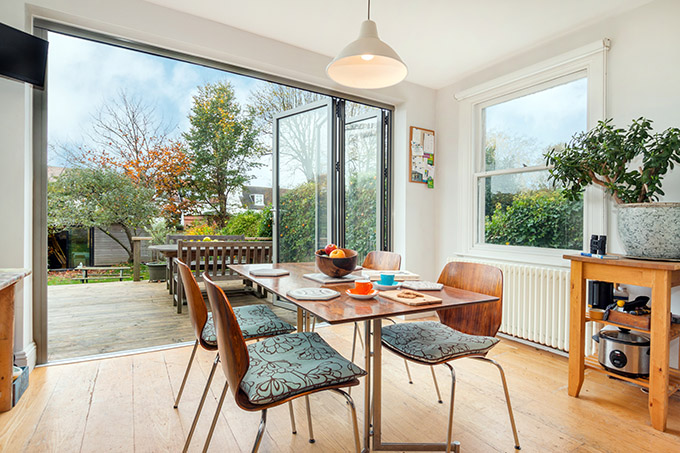 St Ann’s Well Gardens in Hove are known for their chalybeate, or iron-bearing, spring. Such mineral springs have long been believed to have health-giving properties. A health spa was operating there as early as the 1760s. In 1894 the land was bought by George Albert Smith, a film industry pioneer, who introduced hot air ballooning demonstrations. This detached, five-bedroom Victorian villa is nearer to Hove Park, but its well-kept garden might mean you prefer to stay at home. 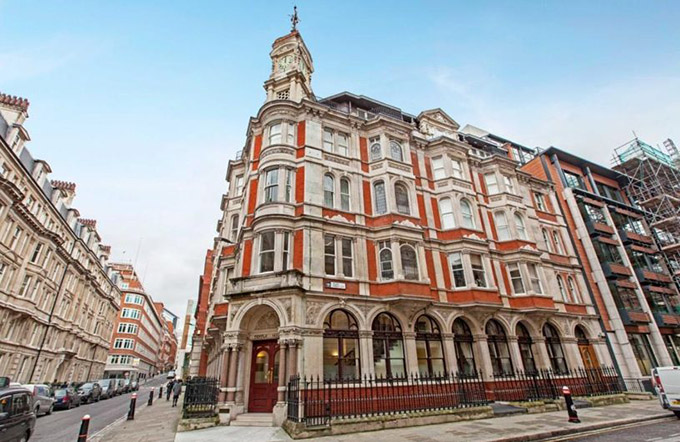 Inner Temple Gardens are usually open to the public on weekday afternoons. Fruit trees are a reminder that this was once an orchard. And it was the first home of the Chelsea Flower Show. This two-bedroom flat is on the ground floor of a Victorian mansion block on a quiet street nearby. 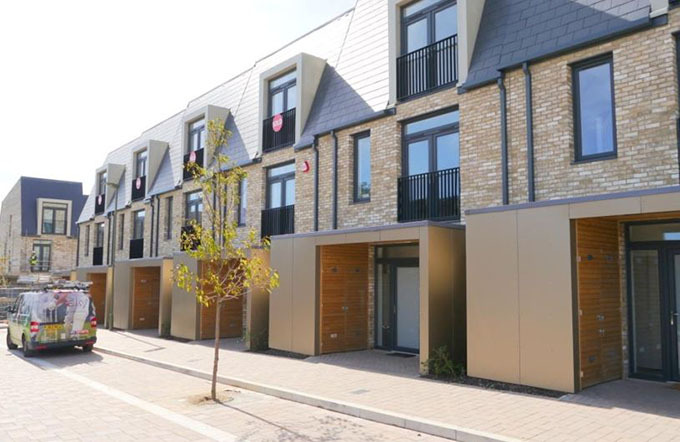 Whalebone Park, next to Barnet Hospital, takes its name from the jawbones of a blue whale that stand at the entrance. It is thought that they were bought back by the polar explorer John Franklin who lived in the house during the 1830s. The park is now a 14-acre stretch of fields and woods. This three-bedroom flat is close by and available as a buy-to-let purchase. It’s newly built and comes complete with a tenant paying £1,800p/m. 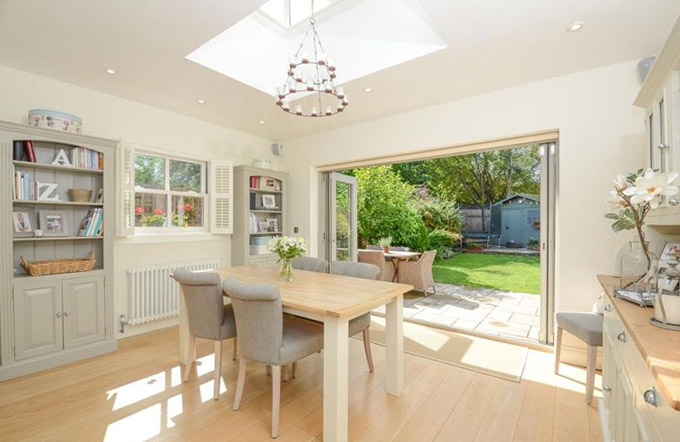 Weybridge Heath is home to all manner of rare insects. English entomologist Horace Donisthorpe spent a lot of time here studying ants. Oatlands Park was once the deer park for Henry VIII. His palace was demolished in 1650 and a new house, built in 1720, had formal grounds laid out around it. This four-bedroom Edwardian property is close to the centre of town, just off the High Street. 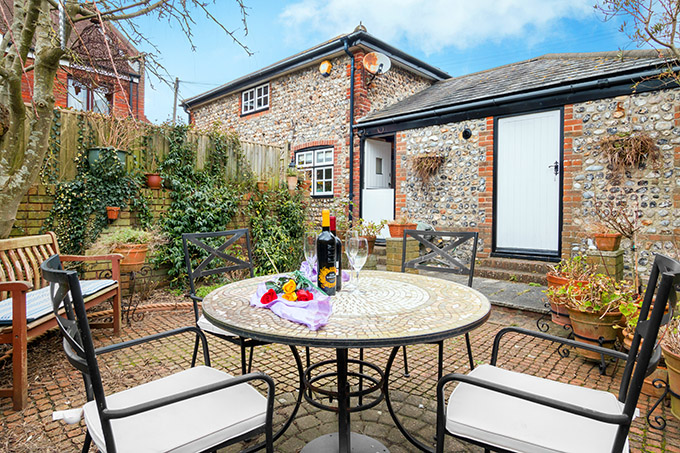 Southwick Green, in the centre of the village, is used for cricket matches and travelling fairgrounds. It was once common land and the north and south fields are separated by a short road. This flint barn conversion is part of Southwick Farm. It has three bedrooms, beams and vaulted ceilings. 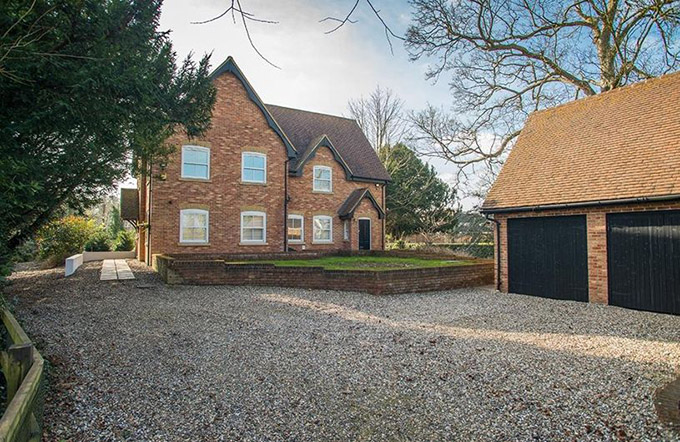 Canterbury is a finalist in the RHS Britain in Bloom competition and is gearing up for a flower-packed summer. Residents and businesses discover their green fingers to make the area look its best. Chartham is a village just outside Canterbury. It has a mainline train service to London and this five-bedroom country property can be found in Station Road. It has top-notch eco credentials, including rainwater harvesting and geo-thermal heating. 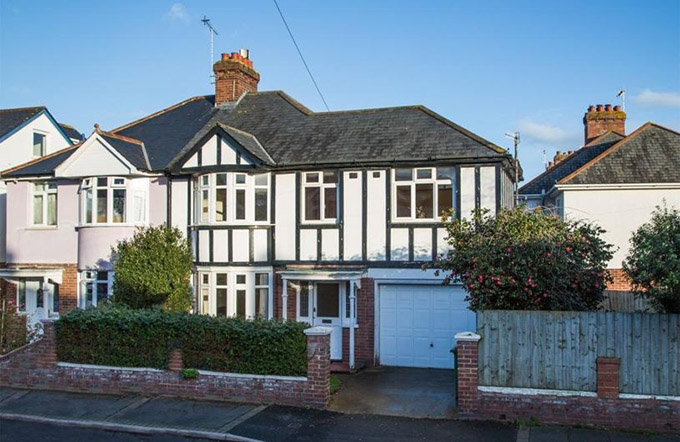 Exeter will also be a finalist in this year’s Britain in Bloom contest. Northernhay Gardens are some of the oldest public gardens in the country. They were laid out in 1612 as a pleasure walk. Exeter University also has campus grounds that are both beautiful and botanically interesting. This spacious older-style property has four bedrooms and a south-facing garden. 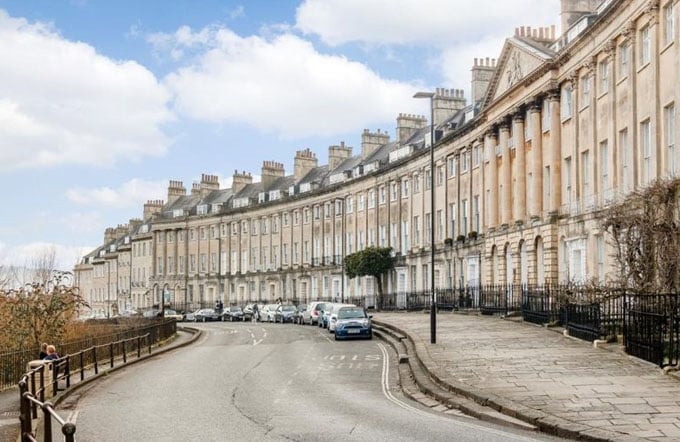 Hedgemead Park in Bath is on a steep slope and is planted with trees and shrubs, giving wonderful autumn colour. Just a couple of streets away, this one-bedroom flat is part of one of the city’s glorious terraces. It has great views over the park towards Bath beyond and it’s downhill all the way to the centre. 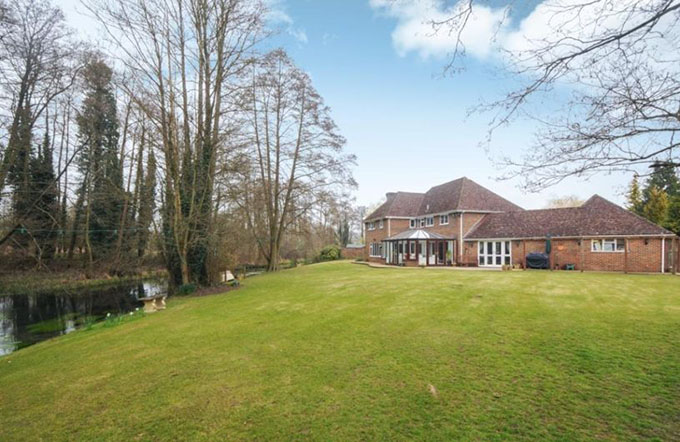 Basingstoke is well-served with parks and gardens. The Walled Garden is a two-acre retreat with flower borders, beehives and a wildlife pond. Old Basing remained a village when neighbouring Basingstoke was extended to provide homes for Londoners after the Second World War. This four-bedroom house has lawns that run down to the River Loddon. 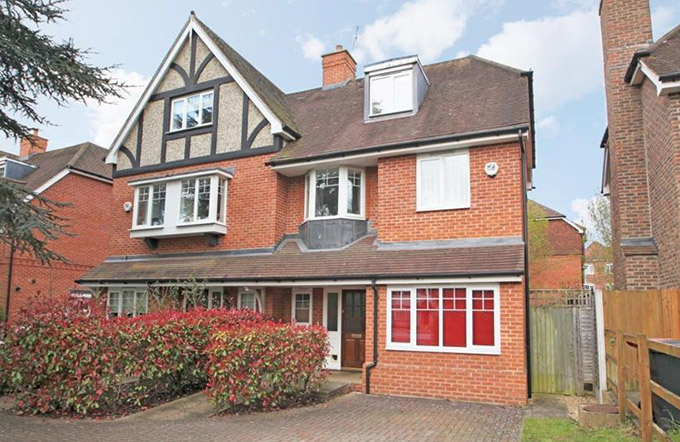 Prospect Park is Reading’s largest open space and it was named for the views it enjoys across the Kennet Valley. This five-bedroom property is on Parkside Road, which is a couple of streets away from the park. It is currently set up as an HMO with six letting rooms. However, it could be a substantial family home with a decent garden. 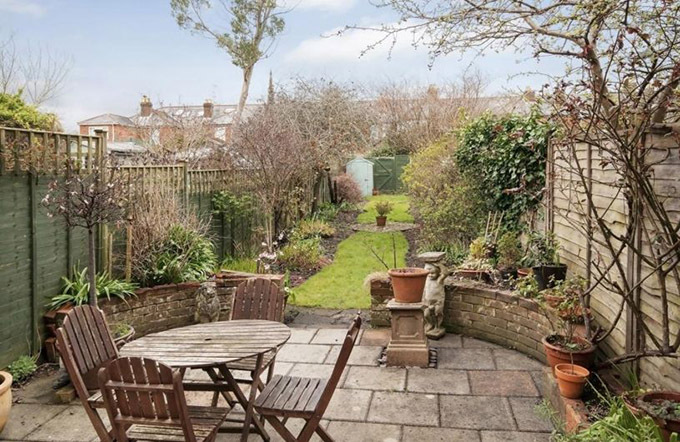 Winchester’s parks and gardens are maintained to a high standard. The Abbey Garden on the riverside and Scott Garden have a formal feel, while The Weirs is less so. Queen Eleanor’s Garden dates back to the 13th century. This three-bedroom house in King Alfred Terrace has a pretty garden of its own, with a patio for al fresco dining. 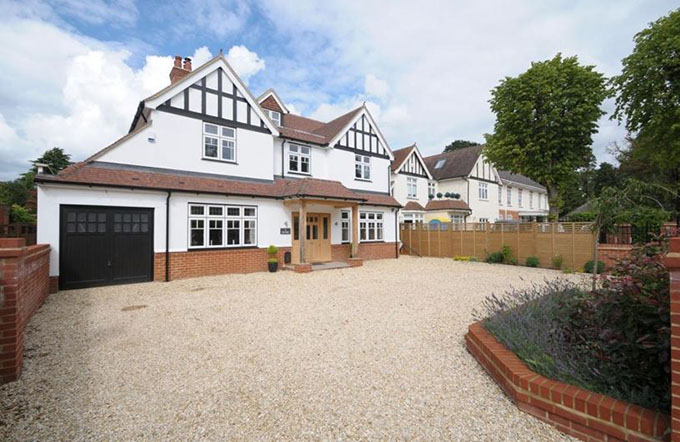 Bekonscot is a model village laid out among bright, flower and shrub-filled gardens. Many of the shrubs are trimmed closely to match the scale of the models. The village lives in a 1930s time warp. You can take a little train around it to see the sights, too. Close by, on the road out of Beaconsfield, this Edwardian detached house has been extended. It has five bedrooms and a huge, modern kitchen / breakfast room. Bi-fold doors open out to the patio and garden, giving a superb entertaining space. 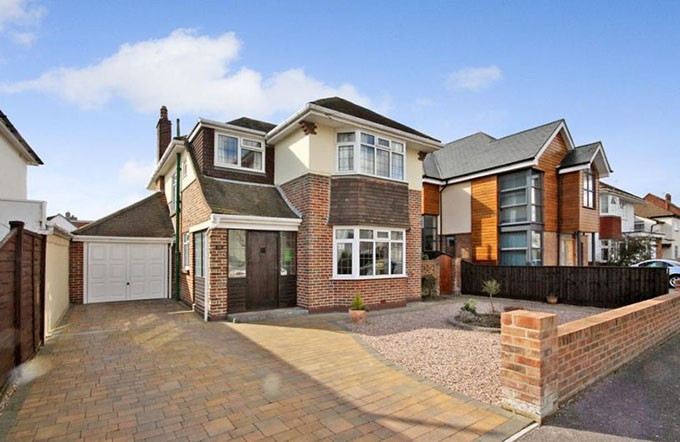 Bournemouth has made the most of its chines, or dry river valleys that run down to the sea. Four of them cut through the town and the most famous is Alum Chine. This is named after the local alum industry, which produced a fixative used in dyeing and tanning. After the industry died, the land was bought and by 1920 had become a tropical garden, making the most of its unique micro-climate. This three-bedroom house has its own enclosed garden. 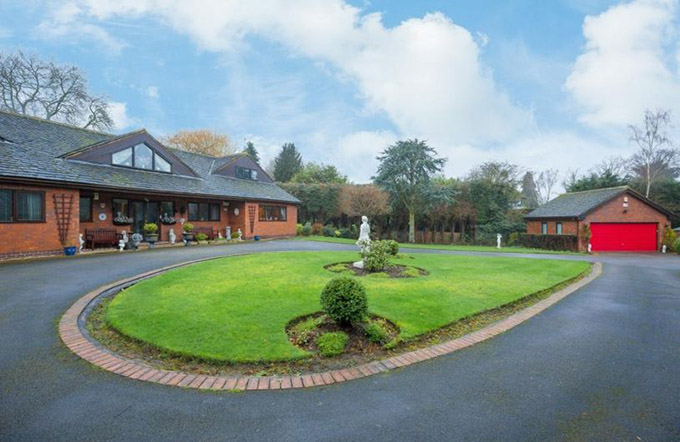 Nottingham’s Arboretum is on a large site close to the city centre. It was designed as a botanical collection in the mid-19th century, and includes flower borders, a healing garden and a bandstand. This architect-designed house in the southern suburb of Edwalton has five bedrooms and an indoor swimming pool. 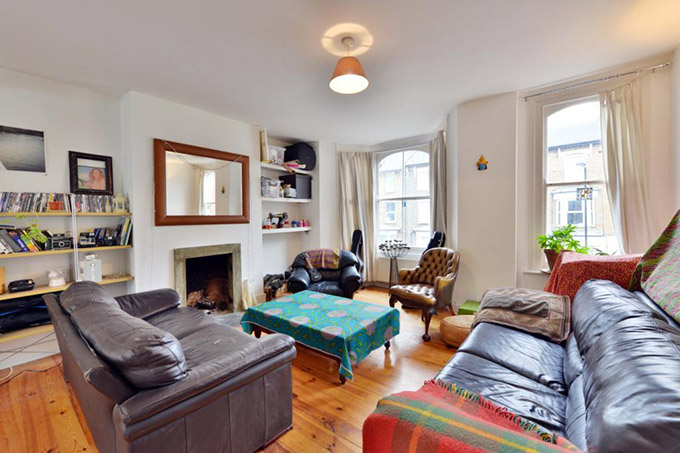 Hackney’s Victoria Park is a huge open space with a large boating and fishing lake. As well as lawns and flowers, it has playgrounds, a splashpool, a model boating lake, cricket nets and bowling green. On a smaller scale, Hackney Downs has lots of facilities for families and this house in nearby Cricketfield Road is a comfortable family home. It has five bedrooms and its own garden. 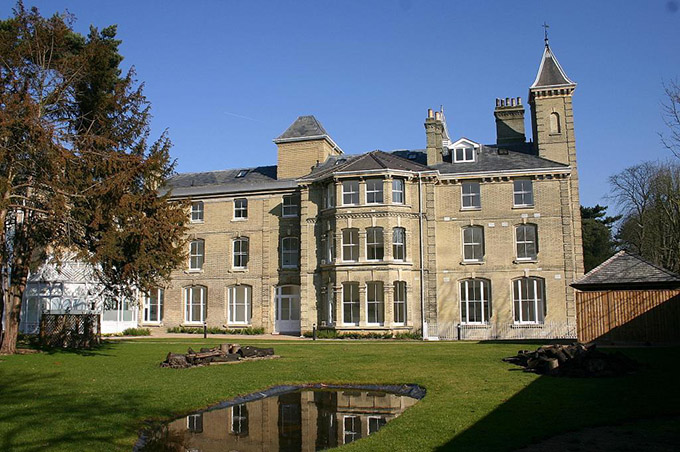 Kew Gardens has the world’s largest collection of living plants. It covers 300 acres and even has its own police force. Mary Tudor lived here in the 16thcentury and the penchant for plant collection can be traced back to the 18th century. This former hospital between Richmond and Kingston has been converted into high-spec apartments and the two-bedroom penthouse has lovely views. There is landscaping and mature trees, too. 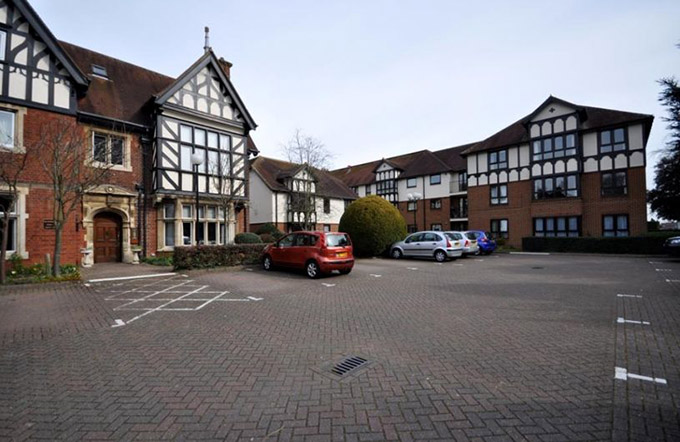 Abingdon Park boasts open spaces with trees, lawns and a tea-room. It contains the ruins of the former village of Abingdon, which disappeared in the enclosures of the 17th century. This two-bedroom flat in the Old School House, just south of the park, is for the over-55s. The complex offers supported living for the elderly.